Vapor Ware, or the Odors of 3D Printing

This is a short talk I gave at the 2017 symposium of the Rutgers-Camden Archive of Digital Ephemera. Kyle Bickoff, Setsuko Yokoyama, Andy Yeh, and I proposed a panel on the 3D printer as an ephemeral technology—and I ended up talking mostly about smell.

My slides were heavily text-based, so rather than embedding all of the images in here, here’s a link to the slides running in reveal.js.

When I initially proposed this paper, I said I would talk about relationships between digital and physical objects—CAD files and figures. This is not that talk.

It’s not that talk because in the course of my encounter with this alien machine, I got sidetracked. I became obsessed with how it smelled. Obsessed not with anything I could make with it but rather the experience of sitting in the room with it, of breathing in its outgas, of inhabiting time with a small robot and watching it blunder and bleed out fumes. And I admit freely that this particular talk emerged out of what I consider to be a supreme act of betrayal of the robot towards me.

In the days leading up to my first encounter with the machine, before it had arrived at MITH and before Kyle had put it together, I read up on what folks had to say about sitting alongside it. And one particular observation, repeated over and over so as to become a kind of Internet forum folk history, caught my fascination: that the particular kind of plastic filament that we had indeed ordered, when fed into the machine and extruded, emitted the distinct smell of baking cake.

Cake! I would love to smell cake and also print out small toys. But when the time came for me to sit with the machine and print out my first object—a kodama recognizable to anyone who’s seen the movie Princess Mononoke—I experienced that aforementioned act of betrayal. I could smell nothing at all. 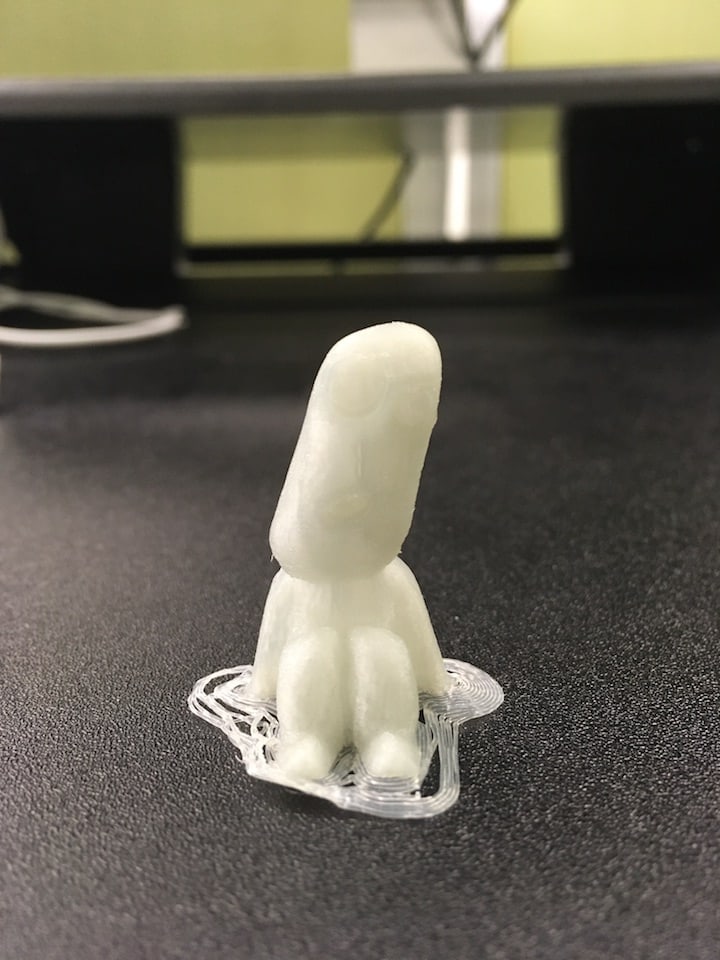 I thank the machine for betraying me, however, because it led me down a rabbit hole of asking why I smelled or didn’t smell cake, what produced that odor, how odors more generally shape our relations with this small, strange robot, and what affective terrain we might map out a consideration of smells. How is smell part of the technological circuit of these machines? What does smell teach us about material specificities, questions of manufacturing, or even where we constitute our bodies in relationship to these robots?

This is a self-consciously brief and impressionistic talk, one more interested in stench than argument—although perhaps my central claim is that for the 3D printer these are in fact the same thing. As such, I’ll let observations drift in and out, suddenly assert themselves and then fade away. But the expectations of the format being what they are, I want to provide some preliminary guiding thoughts that I will test over the next eight minutes.

One final inhale before we dive down: I have still yet to smell any cake. But I have noticed as I come and go in whatever room this printer’s working that the air is different: thicker, perhaps, or more present. It might just me getting accidentally high on fumes. But regardless, I hope you’ll indulge me in what is by no means not the last bad pun in this talk, as I follow my nose.

The odor of a 3D printer has little to do with the machine itself and everything to do with the material one feeds into it. In 3D printing parlance, this is filament, named for its extruded shape. One can make filament out of almost anything, including wood or food, but typical printers—and ours—work with the familiar stuff of 21st century manufacturing: metals and plastics. Mostly the latter, as plastic’s pliable at lower, safer temperatures.

There are a dizzying array of plastics available for commericial use with these printers but you’ll generally see options cluster around two materials: acrylonitrile butadiene styrene, or ABS; and polylactic acid, or PLA.1 Each has a number of comparative affordances: ABS is more common, tougher, and easier to print; while ABS is cheaper, biodegradable, and maintains a higher color vibrancy. But when our team chose which plastic we wanted to use, we went with a very simple distinction: ABS smells absolutely wretched, and PLA smells like cake.

Of course, there were other factors as well, mostly having to do with ease of use in a low-end printer like ours. But our purchasing decisions were in no small part shaped by questions of sensation as well as pragmatics. Smell, as we know from biology class, is a chemical act. All our senses are fundamentally physical, not virtual operations, although they do go through a fair amount of post-processing. Light strikes a photoreceptor in on your retina. Expanding and contracting distances between air particles vibrate the tympanum in your ear. Smell and taste are no different: actual particles of material have to enter your body, transgress a boundary as queer theorists like Mel Chen and Alexis Shotwell observe, and latch onto receptors—bind with them, materially changing them—which in turn stimulate nerves in such a fashion as to create sensations we call “absolutely wretched” or “cake.” 2

PLA gets to smell nice because it’s fundamentally organic in a way that ABS, being petroleum-derived, isn’t. Polylactic acid, true to its name, is polymerized lactic acid, which we can get from all sorts of materials. Indeed, manufacturing processes across the globe vary widely in the extraction and processing of PLA. Here in the West, we tend to make PLA with cornstarch. Other countries make it with local ingredients, from bamboo to tapioca root to sugarcane.3 It is out of these variegated manufacturing processes that I situate a geographical and material specificity to PLA.

To follow this scent further: while the manufacturing process for PLA bespeaks local topographies, it would be bad science to claim that the end product bears measurable traces as such. Iterable and replicable processes of refinement, distillation, and polymerization transform organic material into linked chains of molecules that, in their standardization, maintain shape and resist certain forms of degradation. While PLA might be a plastic with an articulable national or regional identity, this identity nevertheless gets subsumed in a rhetoric of standardization—the standardization of global manufacturing, the disciplination of chemistry, or of the .CAD and .COLLADA protocols that map shapefiles that guide how a robot forms and reforms this polymerized tapioca root.

In his 2015 book A Geology of Media, Jussi Parikka spends a chapter writing about dust.4 Dust, he argues, is a useful substrate through which to consider computational media, precisely because it is that-which-is-cast-off-from-it, or collects around it. Dust is a substance that denies itself as such, that constitutes traces of the subsumed, dislocated labor that activates our technological cognitive economies. Dust, he writes, entangles itself “in the soft organic tissue of the Chinese worker,” by which he asks us to confront the operation of breath, and the ways that through such an entanglement, the lungs themselves become terrain upon which late techno-capitalism asserts itself.

While I am admittedly uncomfortable with some of the racializing formulations of Parikka’s argument—and the general ease with which these kinds of conversations slip into invoking composite figures like the Chinese Foxconn worker or the Congolese coltan miner—it is precisely this dyadic movement between the West and the developing world that the 3D printer, to my mind, stages.

We have recently had an election in America that was about many things, some real and some fiction. One activating issue, as we all know, was the presence or absence of manufacturing industry, and the imaginary of the “good factory job” now outsourced to the developing world. While I think we need to ask for whom were such jobs available and how did such jobs really fit into circuits of capital and exploitation, it’s an undeniable fact that in the wake of late-20th century globalization, the sites of production and consumption for common plastic and digital objects has been dislocated from each other. Where we build and where we use are now two different hemispheres.

The 3D printer seems to shortcircuit this arrangement, relocating the site of manufacturing in miniature. It brings plastic production back to America, moving it into the home or the community space. Within our conversation about smell, I would argue that not only does the printer bring in the product of manufacturing, it also brings in its process. Not only can we produce the same plastics that factories might, albeit on significantly smaller scales, but we can produce the same smells, sights, and sensations—and even, in how little testing has comparatively gone to the health effects of these devices’ outgassing, we can simulate the same hazardous working conditions.5

These two thoughts—that plastics have regional histories subsumed in the standardization of polymerization, which are in turn activated as sensation in the moment of production; and that the 3D printer as an object stages a return of sorts of the site of manufacturing, bringing it in miniature into the home itself—ask us to read the 3D printer, as my colleagues have suggested, as embedded within sociocultural systems of exchange, and political operations of production and consumption. I’d like to close with my third and final thought, through which I want to return more explicitly to the operations of smell as a sensation.

Vapor, like dust, enters our bodies with breath. To return to Parikka’s formulation, the coal-stained lung or even, less perniciously, the smells of cake wafting through MITH, evince categories of labor otherwise submerged in the production of media and the shaping of its materiality. Our hands are not just at work, he argues: our lungs are at work.

Such an argument, taken alongside the thoughts I’ve sketched for you today, might ask us to rearticulate the roles that these external materialities—dust, vapor, soot—play in how we understand technical objects. What if we read this not as a robot that extrudes plastic in a controlled fashion, but rather as a machine that produces vapor, odors, sensations, that has a weird presence all its own that must be reckoned with? And indeed, we do reckon with it: we reshape garages to ensure adequate ventilation, we install hoods and tubes to pipe vapors away from our children or co-workers, we choose some materials over others to mitigate against certain kinds (though never the volume) of vapor. Smell helps us sense aspects of these machines, to paraphrase Matthew Kirschenbaum, otherwise only incidentally revealed to the human perceptual field through a rehearsed procedure.6 As limited and mercurial a sense as it can be for us humans, it nevertheless is rich terrain for media and affective analysis.

I still haven’t gotten my baking cake smell. I browsed the Internet to see if anyone else has run into this weird “problem,” and I think the answer might be relatively intuitive. I just need to turn up the heat.