The Best Game of 2019, Perhaps the Decade, Is A Short Hike

The best game of 2019 is called A Short Hike. In it you play a small bird-person on an island in Canada, populated by other small bird-people and also some mice-people and turtle-people and really just a whole host of animal-people. Your objective is to take a nice short hike to the top of the mountain in search of cellphone service, because you’re waiting on a call from your mom. It looks like this: 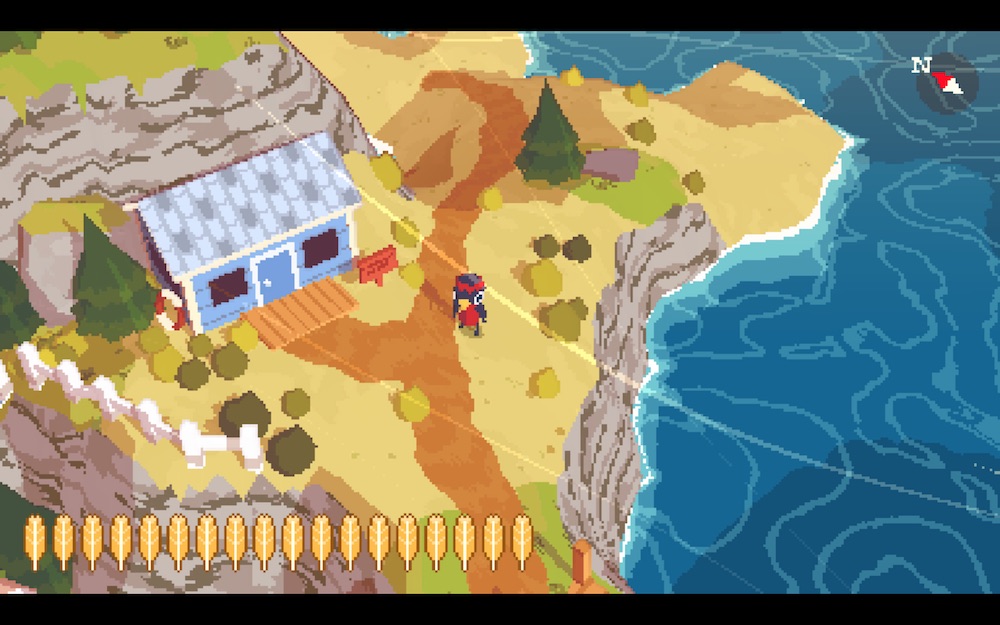 I think the main character has a name but I can’t quite remember.

It is a small game. It takes an hour or two, tops. The gameplay (ugh, terms) is as though someone (@adamgryu, the person who made this game) took the climbing parts of Breath of the Wild and soldered them to the pleasant joy of Animal Crossing. “Soldered” is perhaps not the best term. “Simmered together in a dutch oven for a few hours.” There are various things you can collect if you’re into that sort of thing. I’m into that sort of thing, so it was nice to collect them, e.g. feathers, sticks, etc.

The feathers let you fly higher.

Also you can fly! Flying is great. What I like about this game is that it’s pleasant just to move around, and it’s even more pleasant to talk to the other islanders you come across, and as you move you find more islanders, reinforcing the overall pleasantness. 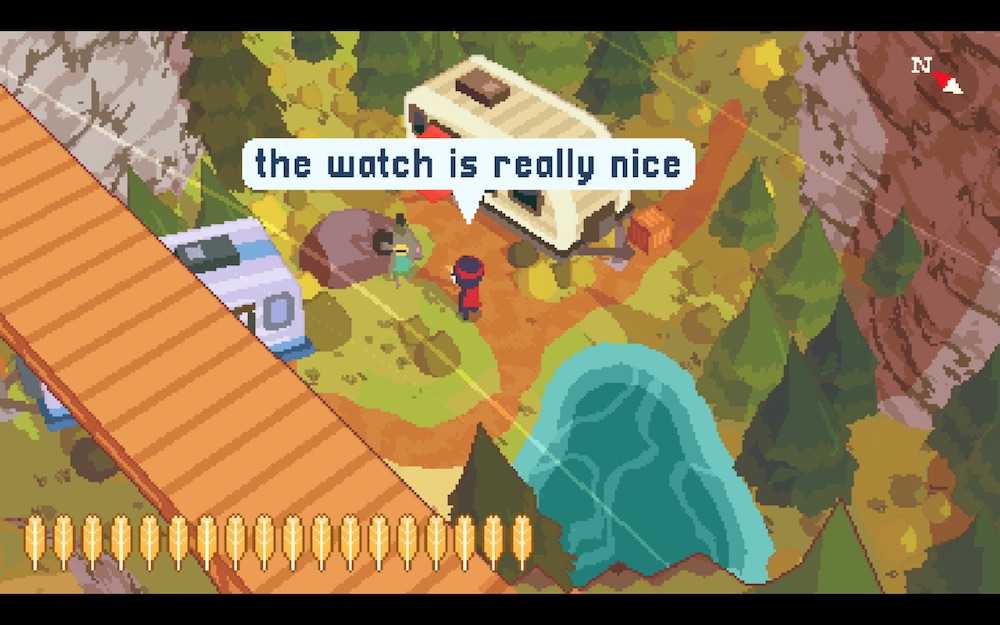 I also really like the font on the dialogue.

I have no other reason to write this other than that this game is something that I really loved, and that got me through what we might euphemistically call “a very hard year,” one that seems to have let up a bit but <gestures vaguely to 2020>, who knows really. And I don’t have a lot of time to myself these days so I value things that are short.

One more thought on that point. When I was in college I worked a few hours here and there in our theater’s scene shop. I became friends with our master carpenter, a wonderful woman named Gina. We were building the set for my friend Grace’s show, which was this massive exploded barn with a dead tree hanging from the ceiling. And I remember Gina turning to me at one point and saying, “I like building all of these big, impressive sets. But for once I’d like to see someone work on miniature scale—make something dollhouse sized, all detail and fine points.”

I find myself increasingly drawn to small scale. This is not a virtue in our day and age. In my line of work I am supposed to aspire to the greatest possible achievement. To get an entry-level position as a professor it is increasingly necessary to demonstrate “global impact,” as though that’s a meaningful and positive thing to which to aspire. A colleague of mine tweeted this:

Hmmm, it appears we've rebuilt the welfare state around the idea that 100% of people need to be above-average performers in order to have their basic needs met. Seems to be some problems there.

which I think about frequently. I grew up in the 1990s and 2000s, peak millennial years. “Change the world” was a common aspiration—as though a single person should be able to do that, that it should be ethical to concentrate that kind of power, that we are not always actively changing the world, that the status quo is not itself better thought a tendency, one leading us down a particular path to our own ruination.

I would like, on occasion, to aspire to little more than a short hike.