I’m taking a seminar with Kari Kraus right now on ruins, and we do some regular writing for that class. I liked this blog post I wrote on Anne Carson’s poem “Her Beckett” and decided to cross-post it over here.

Last class, a fellow student mentioned the Canadian poet Anne Carson’s collection Decreation (2005) in the context of thinking about walls, houses, and homes. Carson is a longtime love of mine, and their comment made me want to go back to Decreation in search of walls, to see what I could find and read by chance.

Decreation is a collection of poems, although anyone familiar with Carson’s work knows that “poem” is often the last word that she would use to describe what she writes. Trained in Ancient Greek and Latin, Carson brings a classicist’s precision with language to the strange twists of the human heart. Decreation collects “poetry, essays, [and] opera” although it’s often unclear what formally divides these three categories, much less the “stops,” “foam,” and “screenplays” that also fill the collection.

“Wall” and its variants appear twelve times in Decreation. (I have a PDF.) It appears a dozen more times as part of the word “swallow,” which doesn’t count, except perhaps it does. Carson’s characters are often up against a wall, whether in passion or fear or both, the “both” that’s common in Greek tragedy when it’s less both at the same time but more a thing in between where one shades ineluctably into the next. My favorite “wall” poem in Decreation is “Her Beckett,” which I’ll reproduce here: 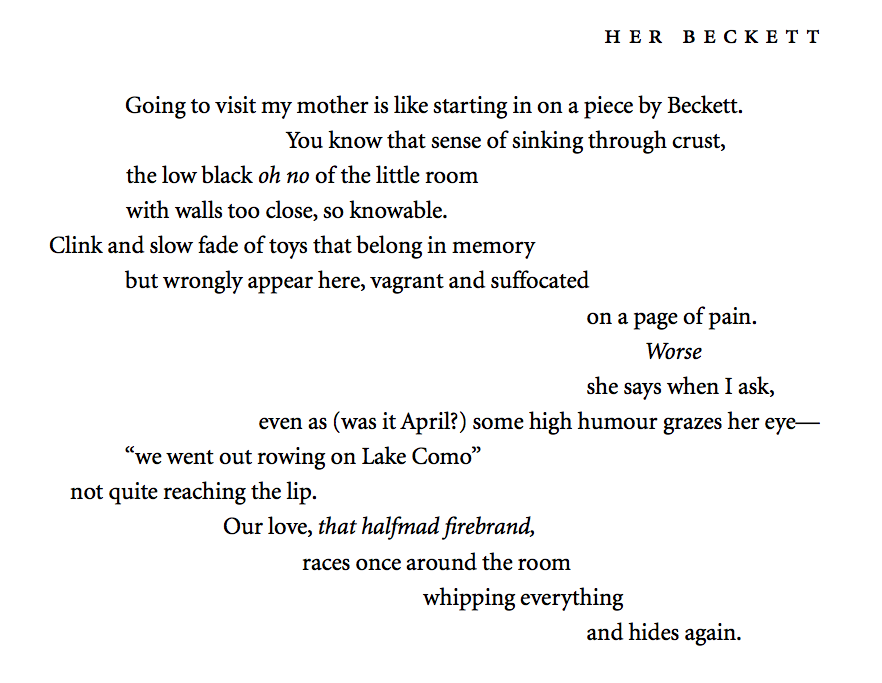 What do the walls do? They’ve already collapsed in the narrator’s mother’s convalescing room (similar to but less insidious than “The Yellow Wall Paper”—here a woman confined by age and circumstance rather than sexism); they are “too close, so knowable.” Beckett is an apt interlocutor for thinking with ruination: Happy Days, Endgame, Molloy, and so much else are all pictures of a slow apocalypse and the doubled-back degradation of a failing-but-still-working memory. When a thing disappears entirely, does it cease to be a ruin any longer? We know that a thing is a ruin when it falls into disrepair and disuse, or perhaps simply a different kind of repair and a different kind of use, but the thing still lingers in some fashion, even if wrongly. “Toys that belong in memory / but wrongly appear here, vagrant and suffocated.” When a person disappears entirely from the physical plain they still do linger after a fashion in soil and heartbreak. But do we call that disappearance a ruin?

Perhaps the ruin is a balancing act between presence and absence, just as “Her Beckett” balanced between a dark decay and “that halfmad firebrand” and the lip of Lake Como. The midpoint of the poem is “Worse,” an apt first blush description of what it means to become a ruin. Things get worse. But what about when they stop? Does ruination stop with the disappearance or total transmutation of the thing in question? When a thing is reduced to rubble and then to dirt and then to forest—a cycle so long we have so few examples of it—do we know to call it a ruin anymore? These are questions that presume their subjects are buildings perhaps, but I’m trying to think about the work of dying writ large.

When Carson’s estranged brother died she made a private artist’s book in his memory that she then reproduced as the volume Nox. It’s a weird object: a single accordion-folded piece of paper that photo-represents the textured and cobbled-together book that we can only assume lives in Carson’s nightstand or desk drawer. The book is, more or less, a work of translation—Catullus 101. Carson works through it line by line trying to come to grips with the act of letting her brother—who existed to her mostly as memory—go.

There’s one wall in Nox, paragraph 4.3. Carson travels to Amsterdam to meet her brother’s widow for the first time (all things sic):

After that we didn’t talk of my brother. Hopelessness built a wall in her. I wasn’t sure new feelings were finished arrving from him yet, but there was no practical reason to say so. It was a relief not to have him droppping through every conversation like the smell of burning hair, to be honest, from my point of view. From her point of view, all desire left the world.

In the physical world, upon the death of a building, its walls start to come down by force or time. In the human heart, it seems, the opposite is true. Can we build a ruin up? Or do ruins only come down? Decay, after all, isn’t just something disappearing: a decayed wall is often full of life; molds, mildews, and rats.

In the spirit of brokenness I am going to leave this post here.