In Lieu of a Proper Post, or There’s Research in the Research Section Now

One of the more honorable goals I set for myself during the first year of graduate school was that I was going to write here more. I then proceeded, as do most who set such goals, to write here even less than I did before grad school. I might point to a confluence of factors: writing on Twitter provides much more immediate satisfaction, though at the cost of one’s immortal soul; the nature of grad school is such that one is constantly engaged in all sorts of provisional writing that does not seem particularly suited for public consumption in an unrefined form, and who has time to refine things anymore?; also I adopted a cat, and taking care of her is frankly more interesting than most things, including writing, which made finals season particularly interesting, let me tell you. 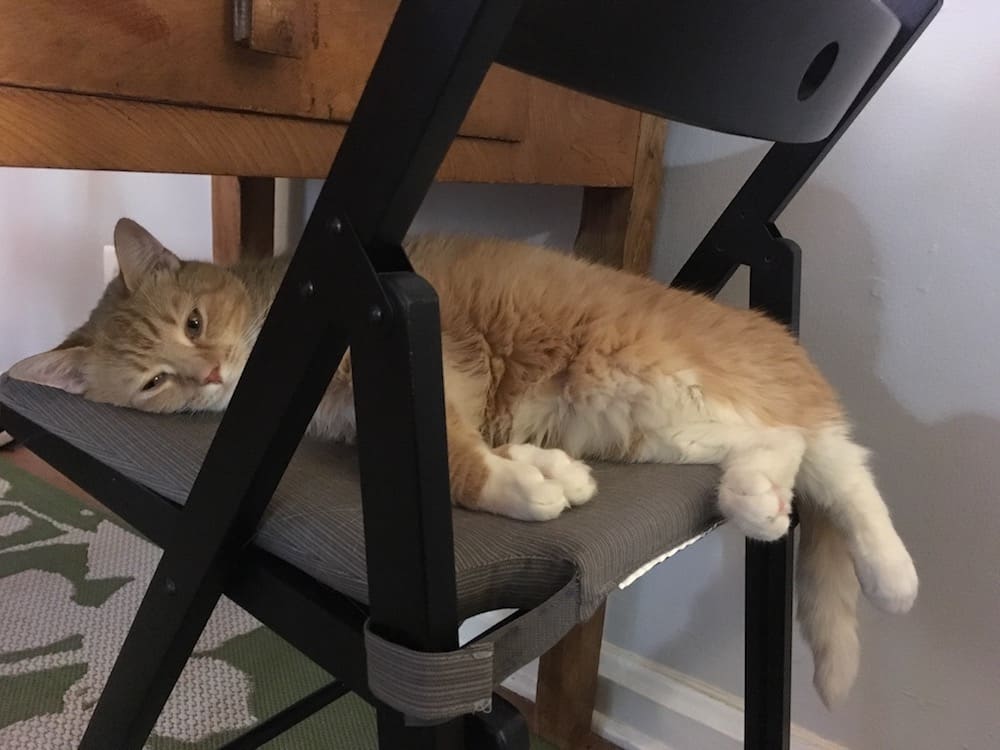 I mean it's not like you weren't going to get a photo.

(There was also the small fact that our nation has descended into even more of a tire fire than usual, which is both demoralizing and distracting, but you can go look at my Twitter feed for that agita, none of it here.)

But these are all excuses! And graduate school does not care about excuses! However! This is the summer, which means that all things said and done I am still on Nebulous Time, and as such can indulge in that great pasttime: summer re-runs.

I spent more time than I expected my first year of graduate school presenting at conferences. This is probably because I am a Presentation Addict: first an actor, always an actor, I suppose. I am also terminally incapable (though I am growing better at it) at saying no to interesting CFPs, and I just get too many of them!

I like presenting at conferences; I like learning from folks presenting at conferences. I do not like conferences themselves that much, all things said and done though, simply because I don’t do super well with the information overload that comes with them, and also I am young enough in my academic career that conferences are mostly about meeting new people rather than connecting with old, and I am not particularly good at small talk. But one thing that frustrates me about conferences is that so much interesting intellectual work happens and then dissolves into a bit of an ether, simply because things aren’t written down. Many conferences are getting better about recording and posting talks, but often that only happens for major keynotes and not the smaller, weirder talks. There was a period where Twitter looked like it was going to be the journal of record for DH conferences, but I think that’s backed off a bit over the years as Twitter became more toxic and we all realized that livetweeting is extraordinarily hard work.1

So this is all a wind-up to say that: I am endeavoring to post the lightly edited transcripts of any conference talk I give here on the site. You can find everything over in the spiffy new Research menu option, which replaces the old Projects one, which was groaning under its own weight. I expect the Research format will as well but I’ll give it some time. It’s got talks from SIGCIS in March on the Internet of Things (with video!), the R-CADE Symposium in April on smelling 3-D printing, STS in May on the textuality of GitHub, and soon will host one from DH2017 on Flappy Bird and media archaeology.2

In the meantime, I have to go write that last talk and try to enjoy this last gasp of good weather before 1) D.C. August heat rolls in and 2) the fall semester starts. Maybe there will be more writing here this fall! (We’ll see!)